President Elect Eric Hoiland opened the meeting.   He then asked Ravi Saip to lead the pledge, which he did.  Following that he asked Jim Patterson to give the invocation, which he did.

Rotary District 5160's Virtual Rotary Foundation Training Day event last Saturday, February 20, 2021.  They were Kelly, Steve Heithecker, Dave Jessen and Larry Bradley.  They learned a lot about how to get District grants.  Walt Schafer, a member of Chico Rotary with a lot of grant experience (he was here for our program) added that we should be determining the project we want a grant for now.  We should be drafting an application in May and submitting the final draft in June.  The grants to be made should be announced late in the summer and the checks sent shortly thereafter.  Once we receive the check it must be deposited in a separate bank account and spent within 2 years.

Eric Hoiland introduced Walt Schafer.  Among other hats he wears or has worn, Walt is vice president of the Honey Run Covered Bridge Association.  He talked about the efforts to rebuilt the bridge and the progress so far. 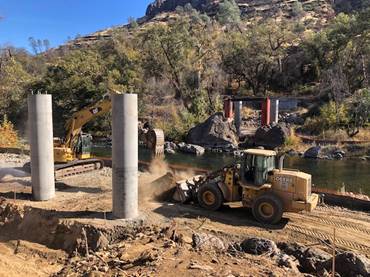 “When the 131-year-old Honey Run Covered Bridge was destroyed in the November 2018 Camp Fire, this area lost a true icon. After 1965, the structure had been pedestrian-only, allowing walk-on visitors and special events like weddings and the annual Pancake Breakfast. The Covered Bridge and the adjacent Covered Bridge Park were revered by thousands of residents of Butte Creek Canyon, Chico, Paradise, Butte County, and visitors from beyond.

Until the Covered Bridge burned, it had been owned by Butte County and managed, except for major repairs, by the nonprofit (501c3) Honey Run Bridge Association (HRCBA). On October 27, 2020, Butte County transferred Bridge ownership to HRCBA with the understanding HRCBA will rebuild the Bridge with private donations. 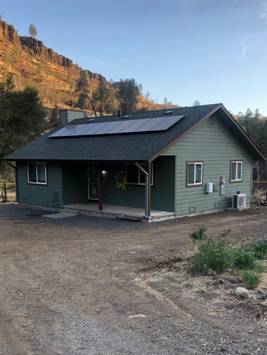 Walt added that they have rebuilt the caretaker’s lodge across the creek, in partnership with Chico State and its students that did a lot of the work.  In addition, the owners of the property across the creek intend to donate a slightly more that an acre to the Association, once the rebuilding is complete.

The Honey Run Covered Bridge Association is recognized as a 501c3 charitable organization and all donations are tax deductible in the U.S.A.  Donations can be made by sending a check to HRCBA at P.O. Box 5201, Chico, CA 95927.

The next meeting will be on March 9, 2021.  Kelly Lotte will present the program.

2021 will be here faster than COVID testing at CVS. With the new year came hopes of a return to enjoying the company of our fellow Rotarians – in person!

But that will not be.  The District Governor has announced that, after a lot of research by District Conference Chair Arne Gustafson and other members of the planning committee, it was decided that the probability of being able to hold an in-person conference for 300+ people this spring in Sacramento were slim and none. So we’re converting our ALL ABOARD! Conference to a virtual format but on the original weekend: April 30-May 2. Folks who made their reservation with a $20 payment are all set – and you too can register for a total fee of $20 if you do so by February 15th! Just visit the district website, Rotary5160.org, scroll down the home page and click on Learn More to register. More info to follow!

Nobody had anything to be recognized for, so there were no recognitions tonight.

Steve Heithecker presented, what he said was his last, quotation, in conclusion of the meeting.  He said that it was a Taiwanese quotation he got from Jen.

“A person who says that it cannot be done should not interfere with the person doing it.”

As we stand at the threshold of the third decade of the 21st century, imagine where we’re headed

In 1915, writing in Rotary magazine, Paul Harris remarked: “What Rotary will be 100 years hence, none living can imagine.”

More than a century later, there’s no need to imagine: Rotary has thrived. As we stand at the threshold of the third decade of the 21st century, we are imagining where we’re headed — and what to expect when we get there.

(This article in the News and Features section of Rotary International’s web page is a led in to five separate but related articles.  The first one on “Philanthropy”, the second one on “Water”, and the third one on “Leadership” have been presented in prior Rowels.  Below is the fourth one on “Environmentalism”.  I intend to present the last one on “Migration” in the next Rowel.)

We don’t need to trade a healthy environment for a thriving economy.

To some people, the term “environmentalist” seems to be a dirty word. In their minds, it denotes starry-eyed zealots who chain themselves to trees.

Or perhaps they envision out-of-touch elites who care more about spotted owls and humpback whales than people, self-centered activists who want to tell others how to live their lives, run their towns, and operate their businesses.

But that’s a wildly out-of-date assumption. Today, environmentalism has evolved into a much more helpful and engaging field. It’s a diverse community that looks to improve the lives of everyday people, as well as safeguard the natural world and our collective future. In addition, over the past couple of decades, rather than merely harping on the environmental problems facing the world, environmentalists have shifted more of their attention toward practical solutions. And they have done that by keeping the focus on people and their collective well-being.

Caring about the environment goes toward our ultimate mission, and we should give it the importance it deserves. As a humanitarian organization, we’re obligated to talk about it.

While it’s important to recognize the challenges facing the environment — and there are many — it is even more important to shine a light on the potential solutions to those challenges, especially those solutions that can benefit society by creating jobs, improving health, and making people more prosperous and resilient. That’s where the future of environmentalism lies. For example, addressing climate change will spur deep investments in energy efficiency, renewable energy, improved transportation systems, smarter buildings, better materials, a healthier food system, and more sustainable forms of agriculture. All of these have the potential to create new jobs, foster new economic opportunities, and generate huge savings and new sources of income.

In the future, as we address our environmental challenges, we can build smarter, more efficient ways of doing everything. We can build more efficient homes that save energy and money for everyone. We can design smarter and more efficient vehicles that emit no pollution; save fuel and money; and are safer, cheaper to run, and more fun to drive. We can reduce food waste, promote healthier diets, and help farmers become more sustainable and more profitable, even as we help to repair our broken food system and curtail its negative impact on the environment.

The idea that we need to trade a healthy environment for a thriving economy is simply wrong. In the future, we can improve the environment and the economy through bold new thinking, innovation, and collaboration. It’s essential that we do that. As Gaylord Nelson, the former senator and governor of Wisconsin who founded Earth Day in 1970, famously said, “The economy is a wholly owned subsidiary of the environment.”

Nelson was absolutely right. At the most fundamental level, our economic systems are built on the environment. Clean water, breathable air, a stable climate, abundant resources, places free from toxins: These are all requirements for a healthy economy. A world where water and air are polluted, or where storms, fires, and heat waves are frequent, or where basic natural resources — water, food, fiber, and fuel — are running out, is a world headed to economic ruin. or about

Improving the environment is crucial not only to the well-being of the planet but to the health of the billions of people who inhabit it — another shift, over the past few decades, in the focus of environmentalists. Let’s step away from our focus on solutions for a moment and look at some examples of the tremendous challenges we face as we move into the 2020s. Look at the impact of the recent fires in California and Australia on the health of tens of millions of people, forcing entire families to take shelter inside for weeks as a precaution against dangerous air pollution levels. Or consider the devastating toll that toxic drinking water can take on all the residents of a single town, as we saw — and continue to see — in Flint, Michigan. And look at the effect of severe and prolonged heat waves on our most vulnerable neighbors, particularly the elderly and those with underlying health conditions.

A degraded environment doesn’t just degrade our health; it also undercuts our security. In a world where extreme weather events and natural disasters are more common and more lethal, growing environmental pressures, including those resulting from climate change, may force large numbers of people into extreme poverty or send them fleeing from their homes into other countries as environmental refugees. Such shocks could overwhelm entire nations and cause severe instability in numerous parts of the world.

In short, without a healthy environment, and without a long-term commitment to maintaining that healthy environment, we cannot have a healthy and thriving society. But let’s take a positive approach to this: If we are smart about it, addressing the most critical environmental issues facing us today is an opportunity for us to reinvigorate our economy and our communities. As Rotarians embark on a bold program of new environmental initiatives, it is crucial to keep this in mind. Solving environmental problems is a welcome chance to fix some of our out-of-date and broken systems and replace them with ones that are safer and fairer. In the process, we can create a world that is healthier and more prosperous for us and our children. Can there be any better future than that?

Jonathan Foley is the executive director of Project Drawdown, a leading resource for climate solutions. A climate and environmental scientist, educator, writer, and speaker, he was the 2014 recipient of the prestigious Heinz Award for the Environment.