Larry Bradley reported that due to the death of Colleen Coutts’ husband interviews of potential Camp Royal students and selection of Students of the Month have been delayed.   John Bohannan expects her to return to work next week so Larry can work things out with her.  Similarly, the “Rise Against Hunger” packaging date is up in the air. 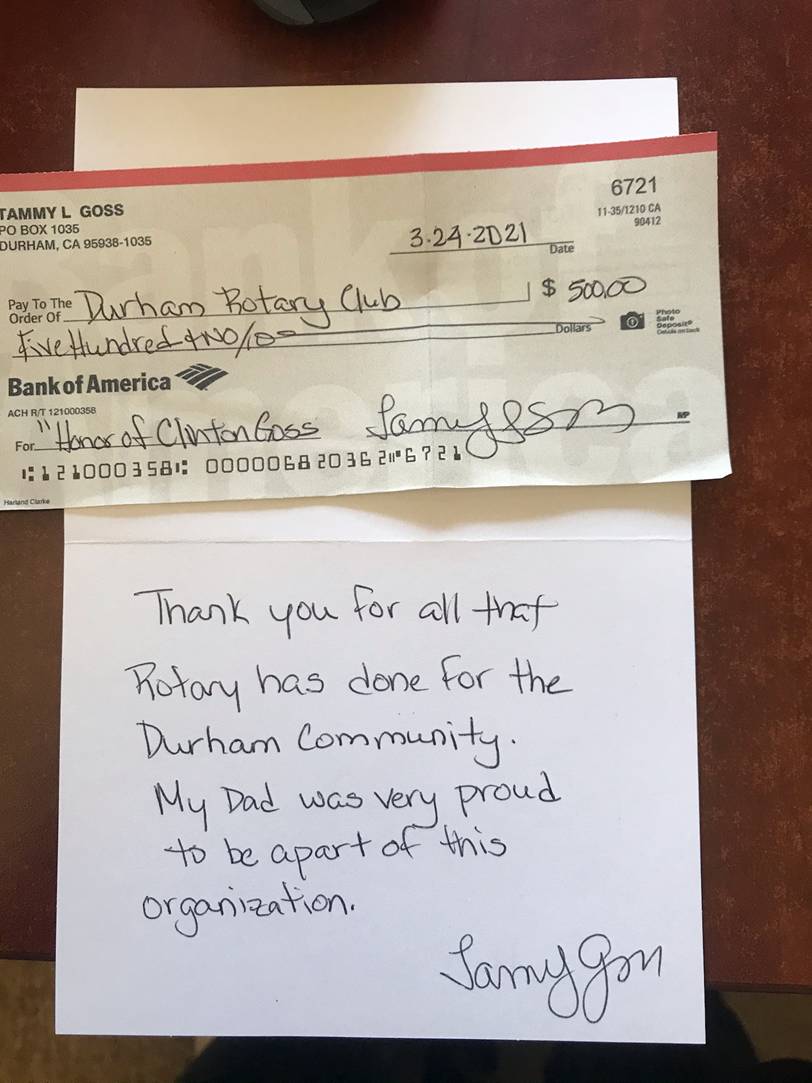 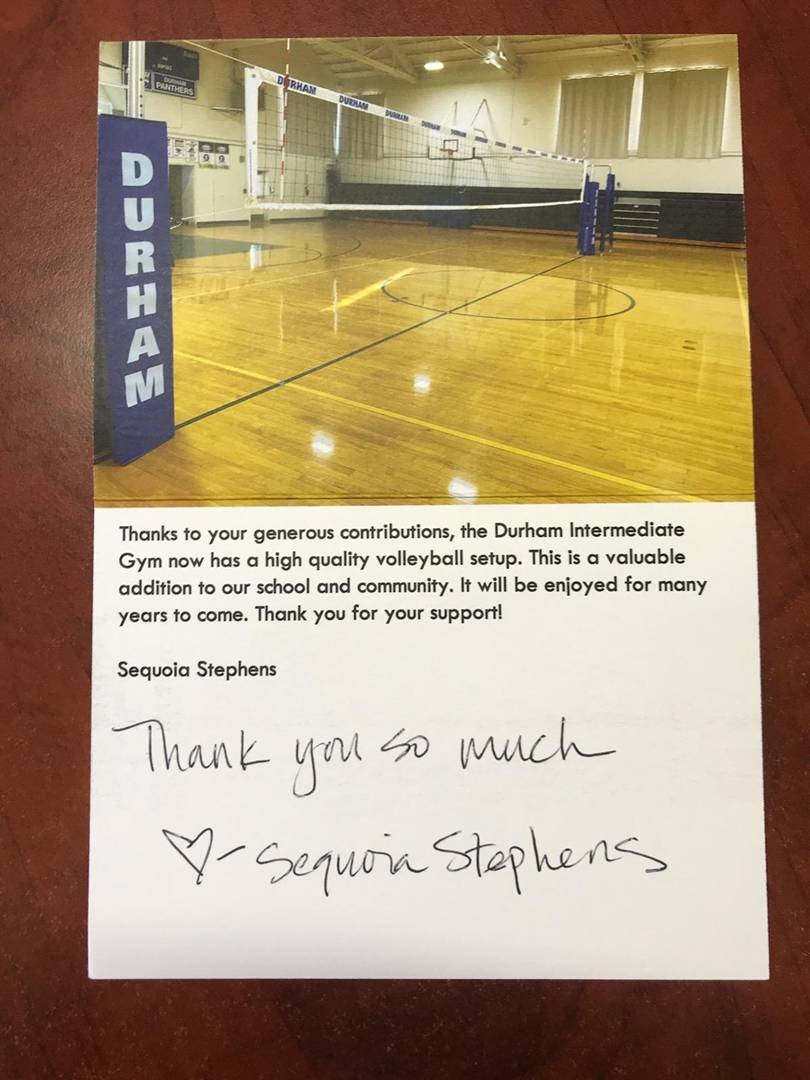 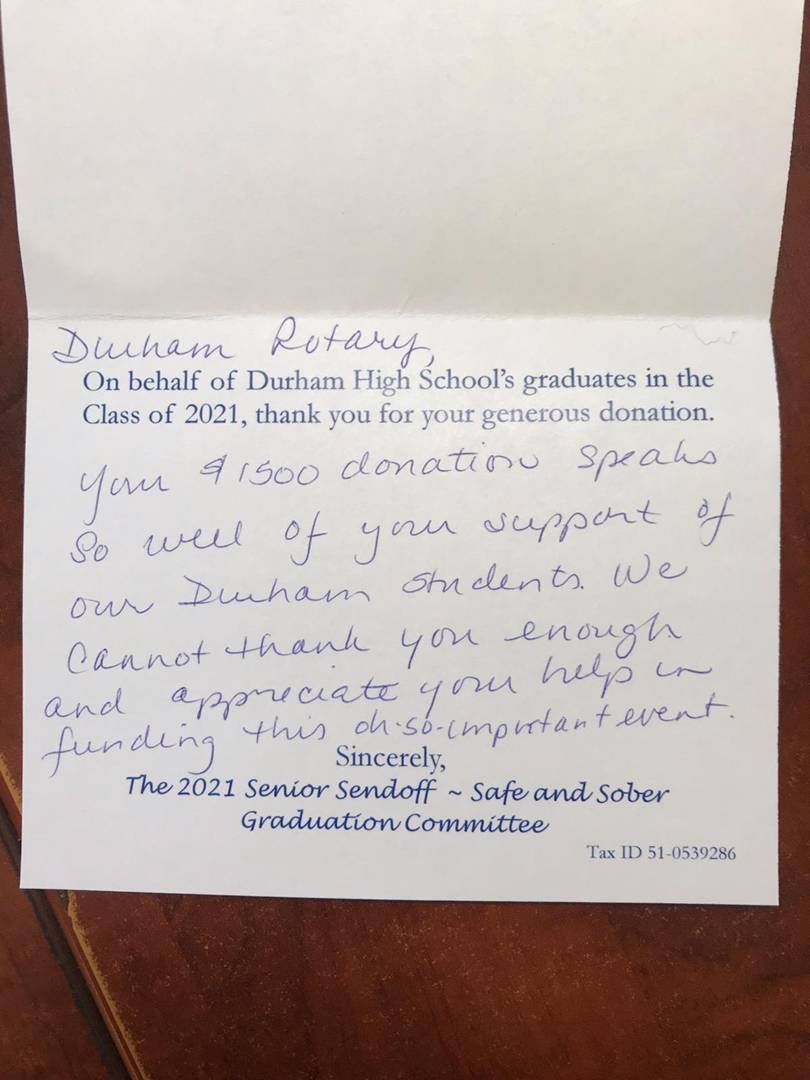 President Jen reported a conversation he had with the manager of the Butte Creek Country Club.  He was told that there was no projected date when we could return for our meetings.  He said that he can be wrong but he got the impression that the manager was not really interested in our returning.  This will be one of the subjects of our Club Assembly next week (see below).

Another subject will be a District Grant project for this year.  Dave Jessen has volunteered to lead the committee to come up with a project.  He will be assisted by Kelly Lotti and Steve Heithecker.

President Jen introduced Jon Dwyer who spoke about District Grants.  Jon was District Governor in 2018-19 and a member of the Benicia Club.  He reported that 26 District Grants were granted including the one we receive for purchase of Chromebooks for Durham High School.  The Grants granted totaled $180,000 whereas the applications totaled about $280,000.  The money comes from the money donated to the Rotary International Foundation.  The money donated is held and invested for 3 years then ½ is returned to the District from whence it came.  ½ of that is used for Global Grants and the other ½ of what is returned is used for Local Grants.

1.     The next meeting will be a Club Assembly (not a regular meeting) to which all are requested to attend on Zoom.  It will be next Tuesday, April 13th at 6:00 pm.  The topics to be discussed are:

2.     The next regular meeting will be on April 20, 2021.  It will not be on Zoom.  It will be at Patrick Ranch.  We will meet at the Master Gardner’s site on the Ranch property, where there are permanent tables and benches.  Park by the Gift Shop/Office building before you get to the Ranch House.  Go through the Gift Shop/Office (or through the gate on the left side of the building).  Once out the back door you will find the Master Gardner’s site to your right.  The program will be an explanation of the Master Gardner’s program at the Ranch and, time permitting, a visit to the new barn on the property.  Mr. Plume will make meal arrangements and Mr. Hoiland will take care of drinks and of course COOKIES.

2021 will be here faster than COVID testing at CVS. With the new year came hopes of a return to enjoying the company of our fellow Rotarians – in person!

Your gift can be made online or by sending Steve Plume a check made out to The Rotary Foundation to Durham Rotary, P.O. Box 383, Durham, California 95958

President Jen the closed the meeting after asking Steve Heithecker for his quote of the day.  Steve’s quote was from Ernest Hemingway:

“There is nothing noble in being superior to your fellow man.

True nobility is being superior to your former self.”

Rotary gets the job done where others failed

In 1991, Mount Pinatubo erupted after 600 years of inactivity and destroyed homes and farms, displacing many indigenous Aeta living in the highlands of central Luzon, Philippines.

While Aeta can refer to several different related ethnic groups, the Aeta here are descendants of Mag-Antsi, who following the eruption, were resettled by the government. Since then, many have returned to their ancestral lands to rebuild and reestablish their communities.

Lack of sanitation where least expected

The world governments have been making progress on increasing access to safe drinking water, but progress on sanitation lags. People lack basic facilities in places you might not expect.

The roughly 43 families in Flora and 79 in nearby Kawayan make a living farming. While Aeta in other areas have been granted title to their ancestral land by the government, these Aeta have seen their lands shrink and their source of livelihood suffer as people from the lowlands staked competing claims during their resettlement years.

Like more than 10 million households in the Philippines, they lack sanitation facilities. The Philippines government has made progress in extending water to its 109 million inhabitants, but long-term plans to expand sanitation are running behind, especially in rural regions. This reduced access to personal hygiene exposes communities to diseases like diarrhea and cholera, and can lead to decreased school attendance, malnutrition, poor oral health, and fear of violence in women who must practice personal hygiene outdoors, according to a report by UNICEF.

Number of children who die each day due to preventable water and sanitation-related diarrheal diseases.

Number of people who continue to practice open defecation.

To combat these problems, the Rotary Club of Intramuros-Manila developed a water, sanitation, and hygiene (WASH) project that installed 25 toilets in the Aeta communities of Flora and Kawayan and three in Babo. Rotary members made visits to the community to learn about and understand current hygiene practices, willingness to work on the project, and the communities desire for toilets.

Before a single brick was shipped, Rotary developed friendships and gained buy-in from the community. Rotary was able to leverage an existing profile of Flora and Kawayan to guide the project, including information on race, history, socio-economic conditions, family units, source of livelihood, and means of transportation.

Behavior change is hard. You’re asking people to do something different from what they were comfortable doing before.

“On our first visit, one of the leaders said that nongovernment organizations and politicians had visited them often, promising to build toilets,” recalls Floren Naguit, project manager and member of the Intramuros Rotary Club. “But none had ever been built.” Until now.

Work began in Flora in early 2018 during the dry season, December through April, when roads are most passable. Together with their international partner, the Rotary Club of Batemans Bay, Australia, the club organized three-person work crews and local volunteers to haul materials by Jeep and carabao-pulled carts up mountain roads and across 26 rivers.

The project paid local teachers, hired by the government, a small stipend to lead three small workshops for clusters of two to three families, and include education on safe hygiene in their lesson plans to encourage behavior change.

Vere Gray (with yellow ribbon), a member of the Rotary Club of Batemans Bay, Australia, gets a tour of the project site by Floren Naguit (light blue shirt), Rotary Club of Intramuros-Manila, during a dedication ceremony in early 2020.

“Behavior change is hard,” says Mark Balla, vice chair of the Water and Sanitation Rotary Action Group, “You’re asking people to do something different from what they were comfortable doing before.” But without it, people can slip back into past habits and toilets can fall into neglect or disrepair.

Perhaps most importantly, Balla stresses the need for patience.

“You are going to get imperfect results. There are no perfect projects,” he said. “We need to understand that we are striving for continual improvement.”

Knowing that monitoring and measurement are critical, the Rotarians performed follow up surveys with the Aeta, asking questions about toilet use and handwashing behavior.

Although visits were suspended in early 2020 due to the COVID-19 pandemic, and then from September to December when the rainy session makes roads impassable, they are scheduled to resume in 2021.