Introduction of Guests and Visitors

Jen then asked the following members to introduce the quests at their tables:

Dave Jessen introduced his wife Suzanne and his daughter.

The next meeting will be on July 13th at the Butte Creek Country Club.  Glenn Pulliam is arranging for a program.

There will be a memorial service for Jim Kirks on August 28th at 2:00 pm in the Faith Lutheran Church in Chico.  The Church is located at 667 East 1st Avenue, Chico.  A luncheon is to follow.  There will be more information in later Rowel’s. 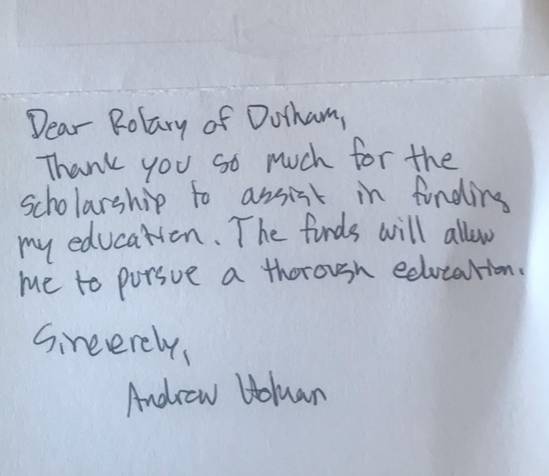 And we received another thank you note from a scholarship winner:

Your gift can be made online or by sending Steve Plume a check made out to The Rotary Foundation to Durham Rotary, P.O. Box 283, Durham, California 95958.

The program was the demotion of Jen Liu conducted by Steve Heithecker.  He started out with what he determined to be Jen’s priorities:

3) Family and a distant number

He reported that Jen liked to invite him over to his house to consult on “Rotary Business”. However, he quickly figured out what he really wanted was a “whisky consultant”.  It took him awhile, but he eventually caught on.

Now his dog Wall-e is his true love. Priority number two in his life as I have noted. I see Jen and Wall-e walking in the park often. I can easily judge how he faired with his other consultants, as he certainly has many, by who is walking whom. On days when I see just Wall-e walking alone in the park with his leash in his mouth, that Jen’s consulting session the day before must have gone extremely well.

He knows Jen loves his family. However, he still can’t figure out why he seldom accompanies his wife to the East coast. “Where is Pam, Jen? Oh she is on the East coast.  When is she coming home?” The response is always the same.  “I don’t know”.

In terms of his devotion to Durham Rotary. Steve noted that this is the second time that Jen has been president. Steve isn’t sure what went wrong the first go around (since he was not a member then), but thinks it was sure kind of the club to give him a second chance. However, after this year, we may have to give him one last try.

After the above, Steve did note that Jen is both a kind and generous person. That he is completely devoted to Pam and his daughters.  Further, he worked very hard to make the best of a difficult Rotary year where fundraising and in-person meetings were limited.

Steve also showed may photos of Jen at various events through the year, some of which he collected from me and some from Kristen Cargile and some, I believe, from Pam (showing Jen holding his new grandchild.

When Jen finally got the floor he wanted to recognize many members who helped get us though the year.  He mentioned the following:

Steve Plume – Despite health issues and busy running a successful business, kept our billing and books up-to-date and is always ready when I needed numbers.  Of all numbers, the one I remembered is 3.1415926

Glenn Pulliam – Our storage unit key master and program chairperson.  Always comes up with material from the storage when asked regardless the weather and the temperature inside our storage unit.

Phil Price – Our perennial rowel editor.  Never missed an issue of our newsletter despite his multiple trips to Mexico

Ravi Saip – Our energetic, all time Master of Ceremony who does not have the word ‘NO’ in his dictionary, successfully pulled off our first ever Virtual Christmas Gift Exchange party of course, with the hep from his wife Mary.

Mike Crump – Who single handedly revived our long-stalled Putney Street project.  He did it by calling on the right county officials with right arguments.  He also took on our annual Rise Against Hunger project at moment’s notice and made it a great success.

Larry Bradley – A member having his hands on every project and program.  He also contributed greatly in fundraising in absence of a Harvest Festival event.

Kristen Cargile – Pulled off a very successful Crab Basket Raffle project.  She presented our club to the community as one who’s members are willing to work and maintain our tradition even in the height of a pandemic.

Jessica Thorpe – A super volunteer.  She’s always there when help is needed.  And she is tenacious.  For example, she promised to bring a PA system to our BBQ party with DHS students.  Little did she know that the owner of that PA system was on his way out of town that day but, she chased him down, lead him back to Durham and brought the PA system to that critical gathering.

Steven Heithecker – I don’t believe anyone told him the tradition that an Immediate Past President generally gets a year off from club businesses.  He worked even harder than his year as the president.  He coordinated and followed through on the Chomebooks project and is still the driving force this year for another district grant.  He also volunteered to assume Jim’s role as foundation chairperson when Jim’s health fast deteriorated.

Eric Hoiland – A member who has the courage to entertain the idea of a two-year term as our next club president.  I believe he is now feeling much relieved after seeing the enormous volunteerism from our members.

Following the above we had the transfer of the Bell and Gavel by Jen to Eric Hoiland our new president for 2021-2022. 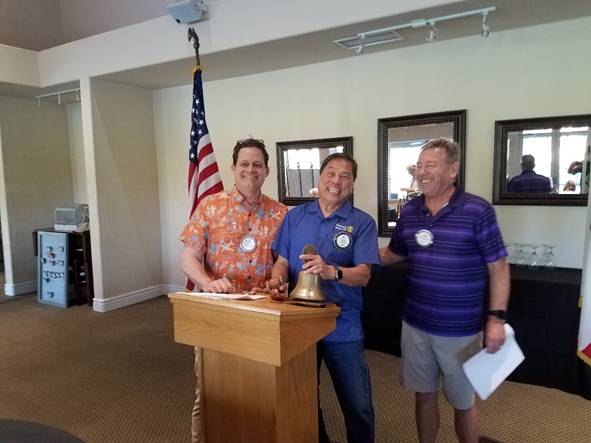 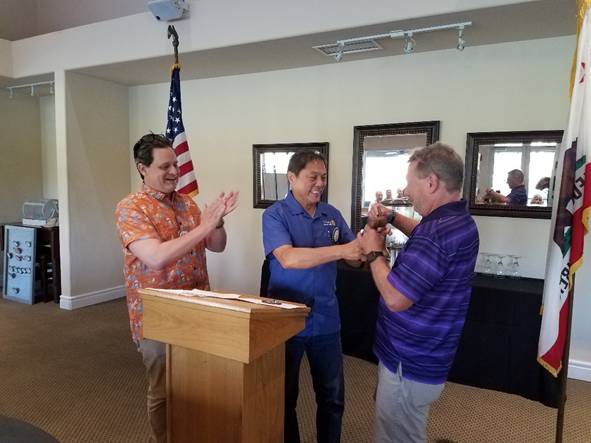 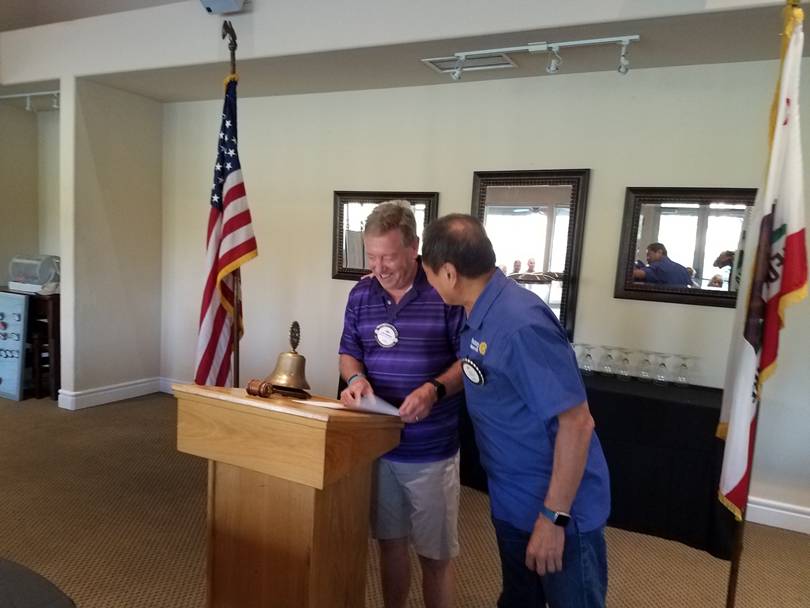 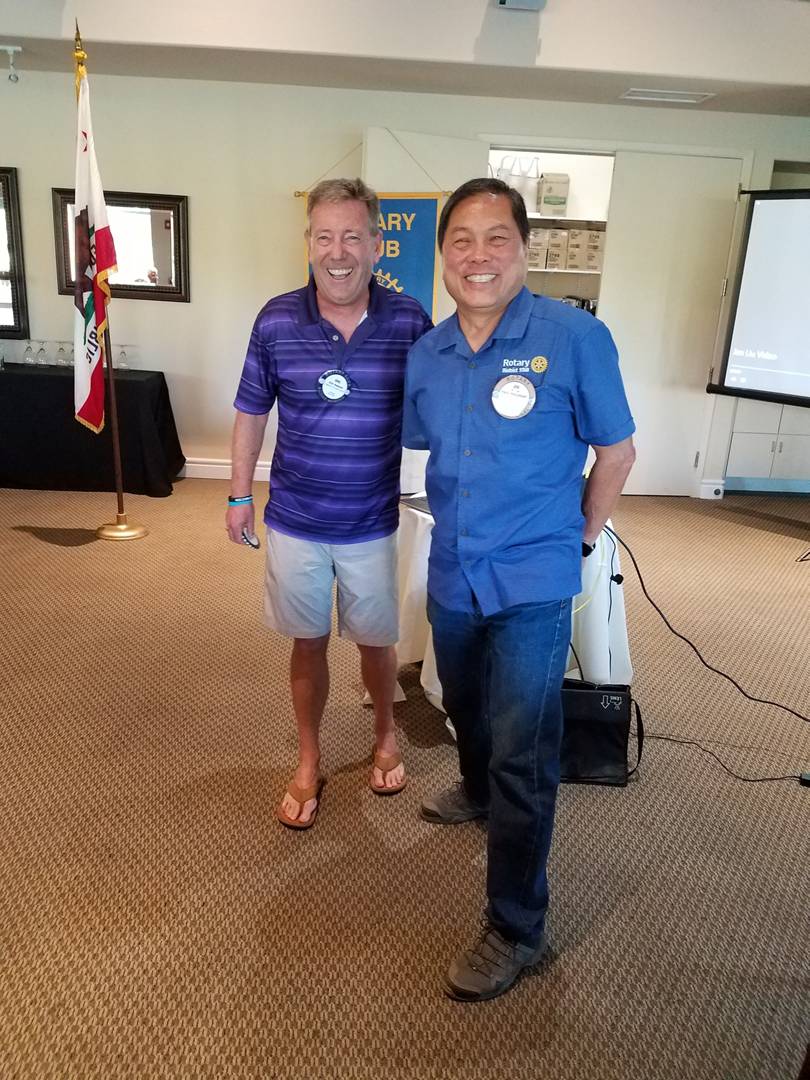 Great Scott! Dr. Emmett Brown aka “Doc” was right. When one puts their mind to it (and with a little help from science) they can accomplish anything - that includes attending the first in-person District 5160 Rotary conference in nearly 2 years!

With an adventure packed theme of Back to the Future, you’ll enjoy the three things critical to a memorable experience:

·        Incredible food and even better company

Join us the last weekend in October (29-31) at the Resort at Squaw Creek! Fall is gorgeous in Olympic Valley, spirits will be high, the hotel is spectacular (limited rooms at a discount so book NOW) and Olympic-caliber FUN will be had.

Register by June 30th and you have the chance to win not one, not two, but THREE free registrations.

See you there!
Kathy

Thousands of people experienced friendship and fun at Rotary International’s second straight virtual convention. The event, held 12-16 June 2021, was conducted online after the convention originally planned for Taipei, Taiwan, was cancelled because of the COVID-19 pandemic.

More than 11,000 people registered for the robust program that included more than 20 guest speakers, informational and inspiring breakout sessions, the interactive House of Friendship, and a variety of engaging virtual activities and entertainment.

During the opening general session, Rotary International President Holger Knaack acknowledged that he was worried about how successful his presidency would be, since he couldn’t visit clubs and projects and provide encouragement and support due to travel restrictions. “But what seemed like a problem turned out to be an advantage,” he said. “By visiting clubs online, I could be everywhere, every day.”

Knaack talked about how rewarding it was to be able to visit clubs and districts around the world in just one day. “In a virtual environment, I could visit a dozen Rotary clubs a week and participate in their projects. It was exciting and rewarding. And I was so proud of the work you did in such difficult times,” he said.

“The pandemic continues to bring great devastation and, for far too many, a very sad ending for people important to us,” Knaack said. “We must continue to honor those who have passed and do whatever we can to bring this devastation to an end as soon as possible.”

Despite the challenges of the past year, Knaack also highlighted successes, including the historic announcement that the World Health Organization’s African region had been declared free of the wild poliovirus. He encouraged Rotary to build on that positive news by staying focused on our commitment to ending polio worldwide. Until early May of this year, he said, just two cases of wild poliovirus were reported worldwide. Wild poliovirus is still circulating in only two countries: Afghanistan and Pakistan.

WHO Director-General Dr. Tedros Adhanom Ghebreyesus gave a video address to online attendees, crediting Rotary for continuing to focus on polio. “When COVID-19 struck, you didn’t abandon your vision of a polio-free world,” he said. “You redoubled your efforts.”

“In a virtual environment, I could visit a dozen Rotary clubs a week and participate in their projects. It was exciting and rewarding”.  — RI President Holger Knaack

“The pandemic has highlighted that unprepared and underserved communities anywhere are a threat to health everywhere. Rotarians know this,” Tedros added. “And I want you to know that your investment in public health will inspire future generations to live up to your motto of Service Above Self.”

Dr. Seth Berkley, CEO of Gavi, the Vaccine Alliance, gave an update on COVID-19 vaccines and spoke about the importance of restoring access to routine vaccinations that were disrupted by the pandemic.

Berkley said 14 COVID-19 vaccines have been approved around the world and more than 1.4 billion people have been vaccinated in the “largest and most complex vaccine development deployment in history.” Gavi is co-leading COVAX, a worldwide initiative aimed at establishing equitable access to COVID-19 vaccines. By the beginning of next year, Berkley said, more than 1.8 billion doses of the vaccine should be available to people living in the 92 lowest-income countries that otherwise would have limited or no access to the vaccine.

But COVID-19 vaccines aren’t the end of the story.

“Now with COVID-19 vaccines flowing, it’s going to be critical to maintain hard-won gains in immunization,” Berkley said, “to recover from the disruptions caused by COVID-19 and achieve even more by leaving no one behind in any situation or at any stage of life.”

He added, “As a valued partner of Gavi, Rotary International will play a key role in all this.”

Other convention guests and speakers included:

The general sessions were hosted by Mark Wright, a news anchor and Rotary member.

Entertainment included performances by The Filharmonic, an a cappella group featured in the hit movie Pitch Perfect 2; the Hiplet Ballerinas, a hip-hop and classical ballet fusion group; Idris Goodwin, a breakbeat poet and a United States Artists Fellow; and DDC Breakdance, a Germany-based dance group.

Convention attendees participated in virtual activities that included a cooking class, a trivia challenge, a dance party, a virtual photo booth, and a 5K walk to raise funds to end polio.