The meeting was called to order by President Eric Hoiland at the Butte Creek Country Club.

Eric asked new member, Peggi Witman, to lead the pledge which she did.  Following that, he asked Jim Patterson to give the invocation, which he did.  Eric then asked Larry Bradley to lead us in a song.  He led us in “God Bless America”.

President Eric then asked Steve Heithecker to introduce the quests at his table.  He had none so those at the table contributed $1 each.

He then asked Ravi to introduce the guests at his table.  He introduced his wife, Mary Saip, who was here to present our program for the night.

Lastly Sharon Robertson was introduced at the third table.  She had brought K. R.  Robertson, for the first meeting he has been able to attend in a long time.  Welcome back K.R.

Kristen discussed the results of the meeting prior to this meeting.  Forget what was reported in the last Rowel.  The plan following tonight’s meeting as to do an “in person” crab feed, using round tables that seat 8 persons.  That means that we cannot seat as many people and hence will sell less tickets.   Kristen’s committee will be looking into finding round tables we can use and round table cloths.  Other than the use of round tables and less people, the meal will be the same.

The cost of food has gone up.  Consequently, individual tickets will be $75.  A table will cost $600.  If you want a table you need to contact Kristen before November 30th when they will be offered to the public

Wait a minute.  See the Wednesday’s email from President Eric:

“At last night's Durham Rotary meeting, we updated everyone on our plan to do an in-person Crab Feed on January 22nd.  We originally had planned on doing a Grab and Go (drive through) Crab Feed, but had made a decision prior to our meeting last night to pivot to an in-person experience.  This decision was based on a feeling that we wanted to get back to our traditional way of offering our Durham Crab Feed.  Overnight, many of us considered the logistics of this and want to come back together to more fully discuss how we want to offer the Durham Crab Feed in January.

I think all of us have a desire to get back to doing the traditional experiences that have contributed to both the community and our club cohesiveness, both of which contribute to our sense being proud Rotarians.  As we make these decisions, we need to weigh what we want to do for our community and what our membership is comfortable with doing during these times.  With that being said, I'd like to invite all of you to a Durham Rotary Crab Feed zoom meeting on Monday evening from 5:30-7.  I think it is critical to get feedback from all of you about your perspectives of doing an in-person experience, particularly your comfort level with volunteering and participating in a large group indoor event in January.”

We hope to see many of you at our meeting on Monday night.  If you are not able to participate Monday evening, feel free to email me your thoughts, concerns, perspectives about our Durham Crab Feed, so we can include those in our discussion.

The zoom meeting information is listed below.

Or Skype for Business (Lync):

It was noted that we had again contributed $150 to the Chico Community Band.

Camp Royal:  Camp Royal will be held live this year, on July 11th – 15th.  But it will be at a different location.

Donation:  A $25 donation was made to Durham Rotary, by Kenneth and Nancy Jensen, in honor of Jim Kirks.

The next meeting will be on November 30th.  Mike Wacker will present Anthony Watts who will speak about Climate Change and whether it is a Climate Emergency.

Following this meeting we will have our Christmas Party on December 7th.   Ravi will conduct the gift exchange.  Since he is conducting a gift exchange, I assume all attending should bring a gift.  I expect a more formal announcement by email early next week

Peggi Witman had a birthday.  Larry Bradley sang “Happy Birthday” to her. She contributed $25.

Jim Patterson also had a birthday.  Larry Bradley sang “Happy Birthday” to him. He contributed $25.

Steve Heithecker was happy he had the Grinder since his brother was just appointed Superior Court Judge.

Ravi Saip introduced his wife, Mary.  She talked about Pampered Chef in which she is involved.  It is the premier direct seller of high-quality kitchen tools providing tips and techniques to make everyday cooking easier and faster.  It is their mission to provide cooking tools that give people more confidence in the kitchen, recipes that help families enjoy mealtimes together, and a business opportunity that makes the everyday better for our consultants. 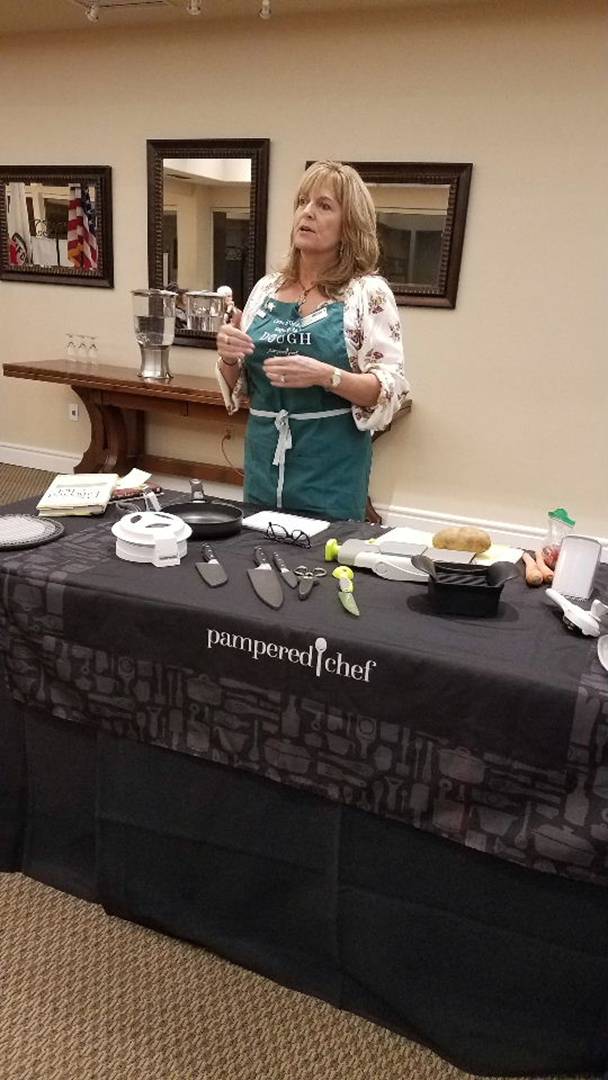 Mary had a lot of the tools set up on a table and demonstrated many of them.

Pampered Chef, founded in 1980 by Doris Christopher and now part of the Berkshire Hathaway family of businesses.

Mary noted how the business substantially increased following the Camp Fire and the Covid pandemic, as more people were eating in their homes.

The name drawn was mine and I was present to win $10.

In view of our next meeting’s program, I thought this might be appropriate.

Young Ugandan Activist Speaks Out About Climate Change in Africa 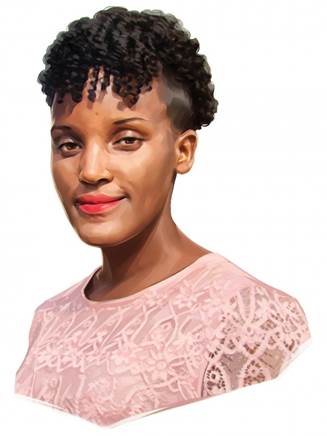 Vanessa Nakate, a 24-year-old climate activist from Uganda, made international headlines after the World Economic Forum’s 2020 meeting in Davos, Switzerland. But the story wasn’t what she said about the climate crisis. The story was that her name and photo were missing from media coverage of the event.

Nakate was one of five young climate activists, including Time magazine’s 2019 person of the year, Greta Thunberg, who had participated in a press conference at the event. But the photo that the Associated Press released to global news outlets included only the four activists from Europe; Nakate, the only Black climate activist in the group, had been cropped out. A video that she made in response went viral, and Nakate has since made it a personal crusade to amplify voices that are not being heard in the climate movement.

“Being cropped out of that photo changed me. I became bolder and more direct in how I talk about the climate crisis and racism and how I articulate the many ways families are being impacted right now,” she writes in her book, A Bigger Picture: My Fight to Bring a New African Voice to the Climate Crisis, which is being released on 2 November. “I decided, from my perspective as a young African woman, that I would dedicate as much of my time as possible to addressing the many interlocking facets of the climate crisis, environmental justice, and gender discrimination — and to do so without apology or fear of erasure.”

Nakate asserts that voices sharing real experiences are there, but aren’t being listened to or amplified.

“Everything regarding what we were experiencing in my country and what we were seeing on the continent of Africa had come out of my mouth, but it never actually reached people.”

“I don’t have full knowledge of what our fellow activists are seeing unfold in their countries, in Kenya or India or South Africa. I may have known that Zimbabwe faced a water crisis, but I didn’t know how valuable water was until I talked to an activist from there.”

Although the African continent is responsible for a mere 3 percent of global CO2 emissions in recent decades, Africans are suffering from brutal effects. Nakate's home of Uganda has experienced floods, landslides and droughts. A locust invasion throughout East Africa devastated food resources. Rising lakes contaminated water resources while others shrunk to 1/10th their size from 50 years ago.

On her path to becoming a climate powerhouse, Nakate was influenced by her father, Paul Mugambe, a longtime Rotary member. As president of the Rotary Club of Bugolobi in 2017-18, Mugambe helped coordinate a five-year project, Mission Green, in which clubs in District 9211 (Uganda and Tanzania) planted trees in communities across their district. (In photos from the 2019 United Nations climate talks in Madrid, where she was invited to speak, Nakate was wearing a Mission Green polo shirt that her father had given her.)

“Watching my dad as a leader of Mission Green sowed a seed that made me decide to be a voice of change,” she tells Rotary magazine. “His courage and his action inspired me to find my voice and to stand up for what I believe is important and what is needed in society.”

Galvanized by the tree-planting project, Nakate decided to embark on an environmental project of her own as she finished her degree in business administration from Makerere University in Kampala. As she researched the challenges that people in her community were facing, she was surprised to discover that climate change was at the heart of many of them. In January 2019, she began protesting at public sites around Kampala, demanding climate action as part of the global Fridays for Future movement begun by Thunberg in Sweden a few months before. Nakate later founded the Rise Up Movement as a platform for African voices in the global climate change discussion. On the grassroots level, Nakate has also worked to install solar panels and eco-friendly stoves in schools.

Nakate emphasizes the importance of including local voices during Rotary projects to provide a sense of accountability and community involvement but also to ensure a project continues once the project team leaves.

“When community members are involved in the implementation, they’re not just receiving the project, they’re also receiving education about the project. Then when you leave, there are people who can still manage that project so that it can continue to sustain the community.”

Nakate encourages Rotary members to use their platforms to raise awareness of the climate crisis and share the work being done.

Interestingly, Nakate notes that girls and women are disproportionately affected by the climate crisis. In some countries, when climate disasters cause families to lose everything, male children are prioritized for school and the girls have to drop out. This increases risk of early marriage, as well as being the primary providers-traveling long distanced to collect food and water for their families, exposing them to disease and gender violence.

“Surely this is what Rotary International means — to be people of action,” Nakate said in a speech at the 2021 Rotary Convention. “So let’s stop talking and start taking action. And the action must start today.”