The meeting was called to order by President Eric Hoiland, at the Butte Creek Country Club.

Eric asked Jessica Thorpe to lead the pledge which she did.  Following that, he asked Jim Patterson to give the invocation, which he eventually did.  Eric then asked Larry Bradley to lead us in a song.  He led us in singing “Rudolph the Red Nosed Reindeer”.

Because we had the District Governor present President Eric asked all members at each table to introduce themselves as well as visitors.

The visitor’s introduced were Sharon Robertson, who was accompanying K. R., and our December Student of the Month, Sydney Porter and her mother, Allison.  Larry Bradley introduced them.

Also introduced were District Governor Kathy Suvia, and her husband, Bill (the two in the middle), and (on the left) Glenn Eaton, Assistant District Governor (a member of the Chico Noon Club).  You know who the guy on the right it. 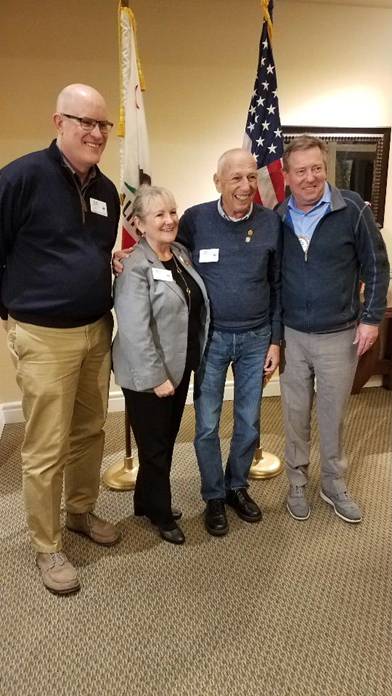 Larry Bradley introduced our Student of the Month for December, Sydney Porter.

Sydney is President of the Interact Club and Vice President of the Student Body.  She attended Camp Royal this past year.  She intends to go to the University of Arizona and study to be a vet.

Larry then presented her with her Student of the Month plaque.

She talked about her virtual attendance at Camp Royal and how much she got out of it.

Back to the Future Award,

President Eric presented, in absentia, a Back to the Future pin to Bruce Norlie.

The next meeting will be on January 11th.    Kristen Cargile will present the program.

Steve Plume was recognized for his 24th Anniversary.  He contributed $24.

Jim Patterson was recognized for his 57th Anniversary.  He contributed $43 (50 minus 7).

Dave Jessen confessed to missing 3 meetings, including the Christmas Party.  He contributed $1,000 to the Rotary International Foundation.  The Bell was rung 10 times. 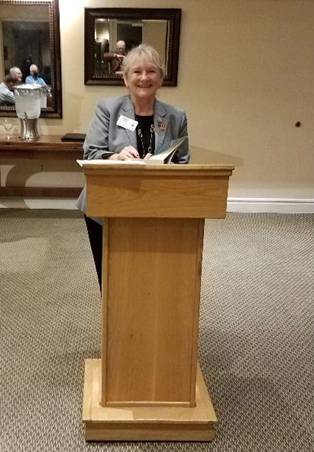 The program was District Governor Kathy Suvia.  She talked a lot about the Polio Plus program of Rotary Intentional and her visit to a 3rd world country regarding polio.  She urged giving to the Rotary Foundation.  She wants every club in the district to end the year with at least one new member.  She talked about the need to increase the ability to adapt.

She also talked about donating to a joint project of the Rotary Clubs District 5160 and the clubs of Davis and of Nakuru Kenya to provide kits containing reusable pads for school girls in Kenya so they won’t have to miss a week of school every month.

How do issues surrounding gender create barriers to polio eradication?

Our ultimate objective is to reach every last child with a polio vaccine. The role of the mother and father in reaching those children is very important, and we must understand the dynamics between them in order to achieve our goal. For example, a mother may want to have her child vaccinated, but that would require her to spend a day walking to a health center or market — and she might not be able to do that unless she gets permission from her husband. Or if her child falls ill and experiences paralysis in the arm or leg, the mother might have to seek permission from her husband to take the child to the health center. There could be a delay of several days that would affect our ability to take stool samples and determine whether that child has polio or not.

On a global level, there is very little discrepancy between reaching boys and girls. You also see a more or less equal distribution of cases of polio between boys and girls. But the global statistics can mask disparities at the local level. We know that we have communities that are not being reached; we need to understand why we’re not reaching them. Gender plays a huge role in both supply of and demand for immunization. Who is providing the immunization — a man or a woman? Who is the decision-maker — mom or dad? And how do the immunizer and the decision-maker work together?

What are the key points in the gender strategy you helped develop for the Global Polio Eradication Initiative (GPEI)?

The polio program has typically engaged women as frontline health workers because in some cultures, mothers are more likely to open the door to a female vaccinator. But women should not just be part of the delivery of the program. They should also be part of its design; they should be supervisors and team leads, and hold positions at the district level to make sure we are meeting the needs of communities. We also need to understand why we have trouble retaining female vaccinators. We want them to keep working with us.

We must look at our data in a way that allows us to understand the program better and to see where there may be gaps. Collecting and analyzing sex-disaggregated data will help us to understand if gender-related barriers are preventing us from reaching zero-dose children — children who have not received any vaccines — and to refine the way we plan campaigns in those countries.

The GPEI’s new strategy places a huge focus on community engagement. We’re looking at the supply and demand sides in communities. How do we create a demand that ensures that parents want to take their children to be immunized? We need to make sure that the offered immunization services are acceptable to parents.

Besides gender, are there strategies that focus on other types of diversity?

We’re also looking at engaging people with disabilities. And gender also covers economic status: A lot of gender disparities are much more pronounced at different economic levels as well as in different ethnic and age groups. For example, the decision-making power of women in developing countries who are not educated is more limited, which will impact their ability to make health care decisions for the family. All of those things interact.

In the last mile of eradication, we need to leave no stone unturned to understand which children we are missing and why. Looking at gender is one more way to make sure that we’re reaching all children. Fathers have just as much of a role to play as mothers. How do we overcome barriers, so that men are engaged in the decision-making process and so that they allow their children to be immunized?

Rotary is so well-positioned to be a lead on gender. It isn’t a women’s issue — it’s everybody’s issue.

This story originally appeared in the December 2021 issue of Rotary magazine.