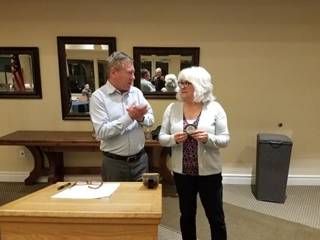 The only visitors were Jason and Christy Allsup with their son, Student of the Month, Owen.  They were introduced by Larry Bradley.

Peggi Witman was presented with her blue badge, contributing $10 for it.  She came from the Walnut Creek Club.

Students of the Month

Our Student of the Month for November was Grace Martin, who arrived late, due to a team practice, without her parents.

Apparently, Owen called her from the meeting to remind her.

Both are very active in sports and both are members of Interact.

The next meeting is March 1st.  Robert Olea will present a program about the new MRIdian Linear Accelerator at the Enloe Cancer Center.  It specializes in MRI-guided radiation treatment for cancer.  It is only one of three in California and the only one north of LA.  One guest speaker will be Dr. Jonathan Clark from Enloe, who specializes in Radiation Oncology.  There will be another speaker, who is yet unknown.

Dave Jessen was recognized for his 45th wedding anniversary.  He contends that they just had dinner at home.  He contributed $45.

Steve Plume missed the last meeting.  It was his son’s 18th birthday.  He contributed $18.

As I pointed out at the end of the last meeting, President Eric overlooked my 63rd anniversary the day before.  He missed it again tonight.  Jessica, you may bill me $47 for it (50 – 13 + $47).  Although, perhaps President Eric should contribute something for missing it, twice.

Steve Plume planned to introduce Tovey Giezentanner who was to inform us about the newly approved Tuscan Water District.  However, he reported to Steve that he had just tested positive for Cofid-19.  That is the second time that has happened to a program since the first of the year.

Anyway, Steve did his own program about his experiences as a Medivac helicopter pilot in Vietnam.  The helicopter held 3 litters and 4 sitting passengers.  He was there one year and flew 1854 missions.  Usually, he flew 5 missions a day.  He lost count of the bullet holes in his helicopter when they passed 1,000.  He was injured more than once and blown up once.  He said that he had been contacted recently by a former team mate who had then been an18 year old medic and was now a retired college professor.  The former medic was contacting all of their team members who were still alive and asking whether they had developed alcohol or drug problems following their experience in Vietnam or had suffer significant PTSD.  Although they had seen and experienced horrendous things, he had ascertained that none had.  They attributed that to the fact that their job was to save lives, not take them.

Glenn Pulliam was present to win the drawing of that name.  He got $10.

The Seven Centers of Peace

Situated in different parts of the world, the Rotary Peace Centers offer tailor-made curricula to train individuals devoted to peacebuilding and conflict resolution — no matter where they land.

Rita Lopidia vividly recalls her experiences as a Rotary Peace Fellow at the University of Bradford in England. “The classes in African politics and UN peacekeeping were my favorite,” she says. “The politics course challenged me to dig deeper into research to understand the history of the continent, and the peacekeeping class aided my understanding of global politics. As a practitioner, that was an eye-opener to have a global view of events happening around the world.” 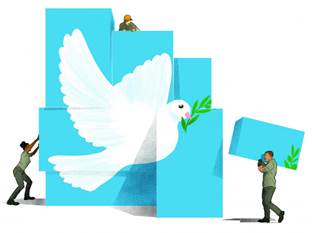 Lopidia's time at the Rotary Peace Center profoundly affected her. "After graduation, I traveled back to Africa and settled in Uganda due to the ongoing conflict in South Sudan," she explains. "There I established the EVE Organization for Women Development and started engaging the South Sudanese refugees in Uganda and their host communities. Through my organization, we were able to mobilize South Sudanese women to participate in the South Sudan peace process promoted by eastern Africa's Intergovernmental Authority for Development — and that led to the signing of the Revitalised Agreement on the Resolution of the Conflict in the Republic of South Sudan in 2018."

Lopidia is just one of the 1,500-plus peace fellows from more than 115 countries who have graduated from a Rotary Peace Center since the program was created in 1999; the first peace centers began classes three years later. Currently, Rotary has seven peace centers in various locations around the world; the newest, at Makerere University in Kampala, Uganda — the first in Africa — welcomed its inaugural cohort of peace fellows in 2021. Next, Rotary plans to establish a peace center in the Middle East or North Africa, perhaps as soon as 2024, and has set its sights on opening one in Latin America by 2030.

As you will discover, the curriculum at each peace center has been carefully crafted to address specific aspects of the peacebuilding process — and train the next generation of global change-makers.