President Eric reported that the Camp Royal interviews has occurred and two girls and two boys have been selected to attend.  One alternate was also selected.

Mike Wacker and Jessica Thorpe will meet on Wednesday to interview candidates for Camp Venture.  Peggi Wittman will be assisting.

The memorial service for Jim Kirks, which had to be cancelled due to covid in the church, has been reset for May 14, 2022 in the Faith Lutheran Church, 667 E. First Avenue, Chico.  (Unfortunately, I will not be home from Mexico until the following day).

This year’s Rise Against Hunger food packaging is scheduled for April 23rd.  It will begin at 8:30 am and should conclude by noon.  I assume that it will be at the same location as last year, but I haven’t received the official word yet.

Mike Crump introduced Kamie Loeser, Butte County Director of Water and Resource Conservation, who will be his program tonight.

The six Scouts introduced themselves.  They then made a presentation seeking funds to attend a Scout summer camp on Catalina Island.  (I remember my Boy Scout troop camping in the snow at Inskip). 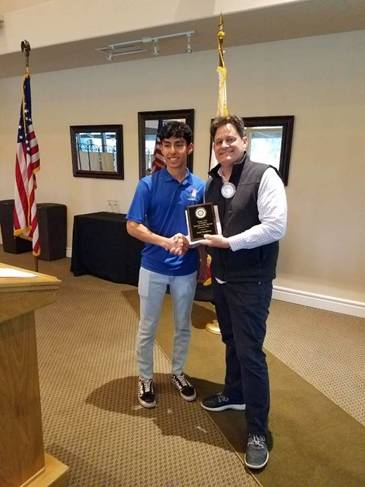 Students of the Month

We had the Student of the Month for February.  He was Joshua Mendoza.

The next meeting is March 29th.  Jessica Thorpe will present the program although what it will be has not yet been reported to me.

Mike Crump introduced Kamie Loeser, Butte County Director of Water and Resource Conservation.  After Jen got her slide presentation working, she spoke about water, drought, conservation, ground water recharging and many other things about water.  She talked about the Sustainable Ground Act which requires attaining sustainability withing 20 years.  She talked about the three water sub-basin in Butte County, which are the Butte Sub-Basis, the Vina Sub-Basis and the Wyandotte Sub-Basin.

Bruce Miller was not present to win the drawing of that name.  He didn’t get $10.

The District Governor is now sending her messages by video, which I cannot include in the Rowel.  However, she did forward the following message:

As one of the world’s largest humanitarian organizations, Rotary has made peace the cornerstone of our global mission. We are deeply concerned about the Ukraine crisis and need your help.

Rotary is made up of people of action, especially in difficult times. In response to the deepening refugee crisis, The Rotary Foundation Trustees have decided to prioritize contributions made to the Disaster Response Fund until 30 April 2022 to support disaster response grants for districts affected by these events. These expedited disaster response grants can be used to supply water, food, medicine, shelter, and clothing.

Half a million people have fled Ukraine and are in dire need of emergency aid. The United Nations estimates that number of refugees could grow to as many as 5 million people displaced. Rotary clubs in Europe and around the world have stepped up their relief work, some working on the ground to help displaced families.

With your donation to our Disaster Response Fund, we can support communities and help rebuild lives during this tragic time.  Click HERE to donate now.

Instead of news from Rotary International, below is the Rowel from March13, 1995 (27 years ago).  I had been doing the Rowel since July 1994. Don Bowlby was the Club President (and the one responsible for talking me in to doing the Rowel, just for his year as President  (ha, ha!).  In those days it was copied on a page with a heading and mailed out to members.

The 37th annual District Conference for District 5160 will be held at the Redding Convention Center and the Red Lion Inn in Redding, California on April 27th through 29th.   See President Don about car-pooling up to the conference.

Bobbi was a Paul Harris Fellow from 1984.  She was her husband Ray's Rotary Ann helpmate in his years of distinguished Rotary service.

Ray is a Past President of Durham Rotary (1987-88), Benicia Rotary (1975-76), and presently a member of Prescott Valley (Arizona).  In Durham, Ray was responsible for Katie Berger's receiving a Rotary Foundation Scholarship, and therefore, for other subsequent successful applications.  As a director of service areas, Ray always led us to new heights.  In his year as President, $11,000 was raised for Polio Plus, and $11,000 for the Memorial Hall project. Ray and Bobbi gave 125% to Rotary, and their influence survives them.  Our sympathy and prayers go out to these dear and special friends.

The  March 13th meeting was opened by President Don, who promptly lost his bell and then later his gavel.  Flag Salute was led by Joe Nock and the Invocation was by Steve Bertagna.

Dan Hutfless, Joe Stricker, Bill Apger, and Al Lotspeich were selected to introduce the visiting Rotarians at their tables.  Those introduced were Ric Landis of the Paradise club and Jack Van Rossum, Joe Masselli, Charles Priddy and Steve Pierra of the Chico club.

Was Mike McDonald, a local farmer and member of the Durham School Board talking on the Computers for Schools Programs which will expire March 31st.  If you have an old computer that you do not use anymore and it is in working order with a working hard drive, contact him.

From The Rotary International News Basket:

One of the last vestiges of Rotary's "for males only" history is  expected to disappear on July 1 when proposed changes to the "Object of  Rotary" take effect.

Rotary International opened membership in its clubs to women in 1989,  following court rulings against gender restrictions in the United States  and Canada a few years earlier.  Despite that opening to women members,  however, two pesky pronouns remained in one of the organization's most  important statements -- the Object of Rotary.

The historic statement, first adopted as five "objects" by the  international association at its 1912 Convention, underwent numerous  revisions before assuming its present form in 1951.  At the convention  that year, the document was streamlined into one Object with four  elements which parallel Rotary's four Avenues of Service -- club,  vocational, community and international.  In two of the four clauses the  word "his" appears.

That pronoun, many Rotarians believed, is  inappropriate for an organization that includes both men and women.

The 1995 Council on Legislation agreed.  Meeting in Caracas, Venezuela,  early this year, the council voted to amend the Object to substitute new  wording that eliminates the masculine pronouns.  The action came on a  two-thirds vote since it amended a part of the RI and Rotary club  constitutions.

As with all other items adopted by the council, clubs will have the  opportunity to oppose the change in the Object of Rotary.  They will  have until June 13 to do so.  If opposed by a sufficient number of  clubs, the action would be reviewed by the RI Convention in Nice,  France.

Jim Piluso won the Raffle and Lindy Robinson did not win the Must Be Present To Win. He wasn't.