Bring guests who you think you can interest in becoming a member.  Think of business owners or managers to bring.  Your dinner and your guest’s dinner will be paid for by the Club.

It was the Harvest Festival.  It rained early in the morning, but by the time members began to arrive (about 5:30 am) the rain had stopped.  It was cloudy most of the day, although the sun did peek out briefly.  It was also unusually cool for September.  The temperature remained in the 60s.  The rain restarted around 1:30 pm.  In between we had a Harvest Festival, although, due to the weather attendance was down.  Anyway, the remainder of the report is in the photos below: 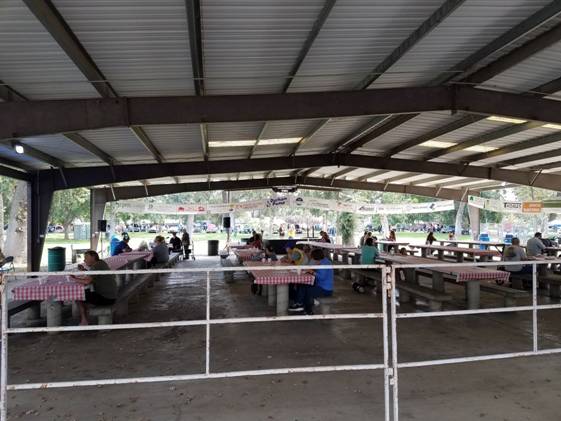 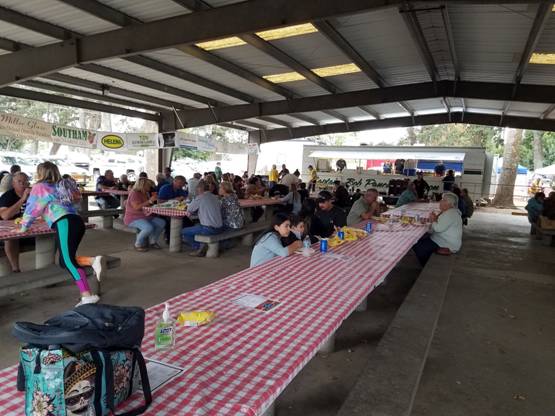 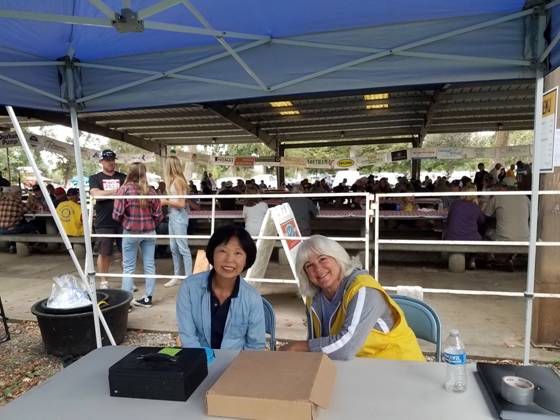 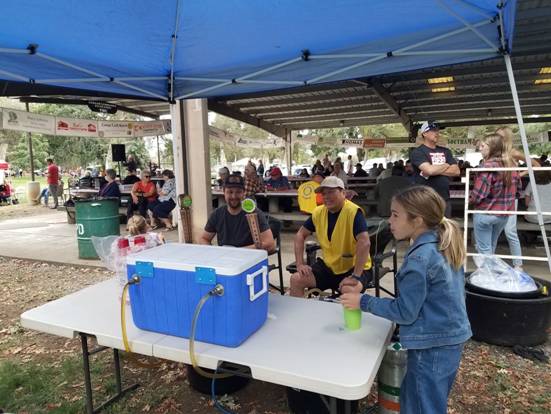 Beer Service, but I don’t think they were serving her. 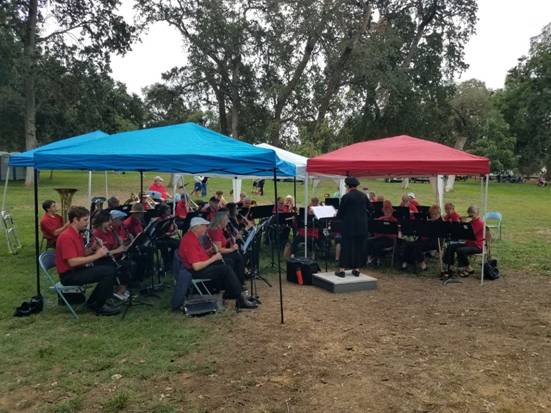 Chico Community Concert Band, but they had to quit when the rain began again. 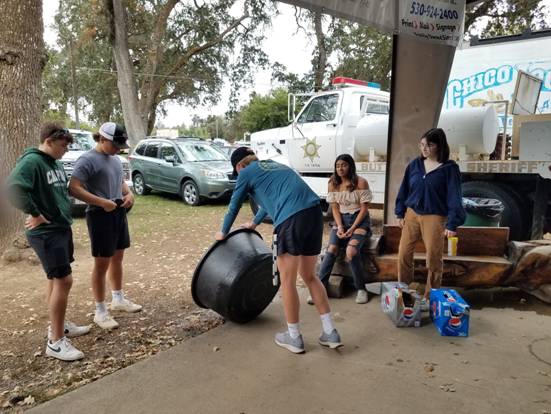 The Purple Shoes Tour By District Governor Suzanne Bragdon Raw Emotion Six days after the Mill Fire hit Weed, I am surrounded by members of the Weed Rotary Club and four community members who lost everything. We are meeting in a well-appointed conference room of Great Northern Services, a non-profit that helps Siskiyou residents get back on their feet; their earlier facility was lost in the 2014 Boles fire. Weed is no stranger to devastating fires. They share their stories. I feel their feelings underneath their words. Raw emotion. Fatigue. Sense of too much taken from those who have so little. Determination. Pride. A community that stands up for its own. Reflections of awe and deserved “bragging rights” of the support already provided by Day 6. Kirk and I had just taken a tour of the areas hit hardest by the fire. That was tough. Their stories? We won’t forget. Human Intensity Imagine being home alone. You’ve just left the hospital where your partner of 12 years is losing his will to keep fighting. You’re exhausted. You try to nap. Your sleep is restless. You sit-up up suddenly. You notice a red glow through the window. You’re surrounded by flames! You grab your keys and race out the front door. Damn, the wrong keys. Flames spread from the house to your truck. A truck loaded with oxygen canisters. Your home filled with the same. You race through the street, fearful of an explosion. No one is around. The smoke is thick. You lay down in the street, praying to die quickly. Until a fire crew spots you. They hoist you into the truck and drop you off in a gravel lot outside the fire zone. You’re stranded but safe; they need to get back to the fire. A guttural wail rolls through your body. A sound of anguish deep within. It emerges as though you’re an animal screaming loud and long, in senseless loss and pain. Miracles. But for… A father works graveyard and sleeps during the day. As the fire is imploding, his son tries to reach him on multiple lines – no pick-up. Son races home, flames everywhere. He shakes his dad awake, and they escape together. Everything gone. A young girl is home from school for the day. The school counselor does a check-in; all is fine. Thirty-minutes later, as the fire is raging, mom calls home frantically but gets no pick-up. A neighbor had seen the girl outside on the deck earlier in the morning and helped her escape. Everything gone. PTSD rebounds and expands. Too many fires. Everything gone

Register by June 1, 2022 to secure your space to the “WORLD PREMIERE EVENT – THE POWER OF ROTARY” - October 28-30, 2022  - for only $199.  After that?  The price changes to $225 per person.  Then soon it's $250 per person…
There’s more!  You can NOW register for
Golf on Thursday, October 27th at the Del Monte Golf Course for only $140 (includes lunch).  A Hollywoodesque-soiree on Friday evening, October 28th for $25 at the stunning Marriott Ferrante Bay View venue (dancing, dessert, open bar and stars galore; space limited).

Jennifer Jones began her term as Rotary International’s 2022-23 president in the midst of her Imagine Rotary Canada Tour, traveling coast to coast to coast to draw attention to the positive and lasting impact that Rotary clubs have in their communities.

"The Canada tour was awesome because it brought together different demographics," she said. "Every stop was representative of all ages, all cultures. The Rotary family was so excited to be together, to be in person, and showcase what they were doing. There were incredible, incredible things that people planned."

Organized around several hubs, the tour started on 17 June with an excursion through Yukon and the Northwest Territories, brushing up against the Beaufort Sea, an arm of the Arctic Ocean and one of Canada's three coasts. From there, it visited Jones' home city of Windsor, Ontario, and then the nation's capital, Ottawa. It next moved to St. John's on the Atlantic Ocean before heading west through Quebec City, Toronto, Winnipeg, Calgary, Edmonton, and Vancouver before reaching Victoria on the Pacific Ocean.

A few hiccups prevented Jones and her husband, Nick Krayacich, from linking up with the tour for its first few days. Luckily, past RI Vice President Valarie Wafer and her husband, Mark, as well as past RI Director Bryn Styles, and his wife, Randy, were able to step in.

"The thing you never forget is how people make you feel — and we were treated so well as we traveled across the country," Mark Wafer said.

Mark Wafer said being able to celebrate Canada's National Indigenous Peoples Day in Inuvik, Northwest Territories, was the highlight of the trip. Jones also talked about how meaningful it was, later in the trip, to hear how clubs are involved in the effort to build and revitalize relationships among Indigenous and non-Indigenous Canadians.

"Engaging with First Nations and Indigenous people was an element of every one of the stops," Jones said, recalling an encounter with Bruce Starlight, a Tsuut'ina elder, in Calgary. "To be able to sit and learn from each other, to talk, to ask questions. That was a big part for me personally: the ability to learn how Rotary fits in and what clubs are doing to move forward with truth and reconciliation."

In Windsor, Jones got to see members of her home club, the Rotary Club of Windsor-Roseland, as well as the new Imagine Rotary Trail with its 40 freshly planted magnolia trees. From there, the tour progressed to Ottawa, Canada's capital. It was there that on 1 July — which is also the Canada Day holiday — Jones fittingly began her tenure as RI president. Here and at other stops, Jones met with elected officials.

"Tons of government people came out along the way," Jones recalled. "We met senators and lieutenant governors and [members of Parliament]. It was an opportunity to thank our country for supporting Rotary's polio eradication efforts."

The next stop brought Jones to the Atlantic coast and St. John's, the capital of Newfoundland and Labrador, where she met with members of the newly created District 7815 and the tour members put their feet in the Atlantic.

In Quebec City, Jones greeted Rotary members from seven districts in Canada, the United States, and Africa at an evening reception.

A whirlwind of events in Toronto showcased the combined efforts of four districts. The day began with a watershed cleanup in the middle of a torrential downpour.

"We were not only cleaning up the beach, but cleaning off ourselves in the rain," said hub chair Michele Guy.

Rotary members in Winnipeg featured projects underway in their city and throughout District 5500 via social media and a 67-minute online video.

In Calgary, where the tour participants met with First Nations leaders, there were also comic moments. In the middle of the Calgary Stampede parade, Jones' white convertible broke down and the occupants got out to push the car.

"Twenty seconds later it started up again, but the picture on the TV news that night was us pushing the car," said Jones. "Which kind of looked like maybe it was supposed to happen. We'll go with that."

In Edmonton, events unfolded around Fort Edmonton Park, a legacy project of four Rotary clubs that was launched nearly 50 years ago. Attendees planted trees, participated in an Indigenous Peoples Experience, and later joined hands and took part in a singalong of John Lennon's "Imagine." The unofficial song of Jones' presidential year was this time dedicated to the people of Ukraine. The following day brought a visit to a peace garden in Vancouver, a beach cleanup a few miles north of the U.S.-Canada border, and a reading event at the Aboriginal Mother Centre.

Finally, on 11 July in Victoria, Jones and her group dipped their toes in the Pacific.

For Jones, the moment recalled the journey of Terry Fox, a Canadian athlete who had cancer. He set off from St. John's in 1980 intending to run all the way to Victoria. He couldn't complete the journey, but monuments to his effort stand in both St. John's and Victoria.

"It was one of the most poignant moments of the tour," Jones said, "with everyone talking about what his run signified and the hope he gave to people."

For more stories and photos from the Imagine Rotary Canada Tour, visit the tour's Facebook page.