Dinner was catered by April from the Chatter Box.

It was again (for Steve Plume) announced that the Crab Feed will be on January 21, 2023.

The Orland Club will be celebrating their 75th anniversary with a lunch and program by Mike Wolcoitt, Editor of the Chico Enterprise Record.  See the flyer at the end of the Rowel.

It was noted that about 8 of the checks we issued to Paradise teachers for Camp Fire relief were never cashed.  The teachers had apparently left the area and had no use for the money in Paradise schools.  We apparently have about $3,600 left in the fund.  It is proposed that we stop payment on the uncashed checks and that we issue new checks.  At this point your editor got confused, because if 8 checks were for $3,600 then the checks were for $450, which is not what I recall.  And they were talking about 6 new checks, which would be $600 each.  Anyway, your editor has asked for clarification but has not received it in time for this Rowel to go to press.

The next meetings will be as follows:

On October 11th Larry Bradley will present the Camp Royal Students.  He will also bring the September Student of the month.  The meeting will again be at Durham Memorial Hall.

On October 25, Ravi will present the program.  It will be at Airspray, 77 Piper Ave, Chico Airport.

Steve Plume contributed $78 for his 78th birthday and a song by Jen Liu.  He also contributed $30 for his confusion about the announcement of the Crab Feed Date.

Larry Bradley contributed the usual $10 for his birthday and a song by Ravi.

Jen Liu contributed $58 for the breakfast sausages he acquired at the end of the Harvest Festival so he could become a Double Bell Ringer.

Tonight’s meeting was a debrief of Harvest Festival.  There was a discussion of the effect of the rain on the festival.

Jessica had provided us with a preliminary fiscal report.  It was missing the charge by the Sheriff’s Department for the Captain Bob, which we have not received yet.  After figuring in an estimate of what that will be, essentially, we made about $8,000 less than last year.  But we have enough for our scholarships this year.

A number of things were discussed, such as the number of Interact Students.  We probably had to many.  Parking went well this year.  We do need feedback from the vendors and the car show people.  The donated hot dogs and buns were not very good and we will seek another source next year.  The improved signs were discussed, including the two on highway 99 that disappeared (apparently there was road work being done in the area).  Also, the cost of stakes.

Eric then closed the meeting.

From the Orland Club 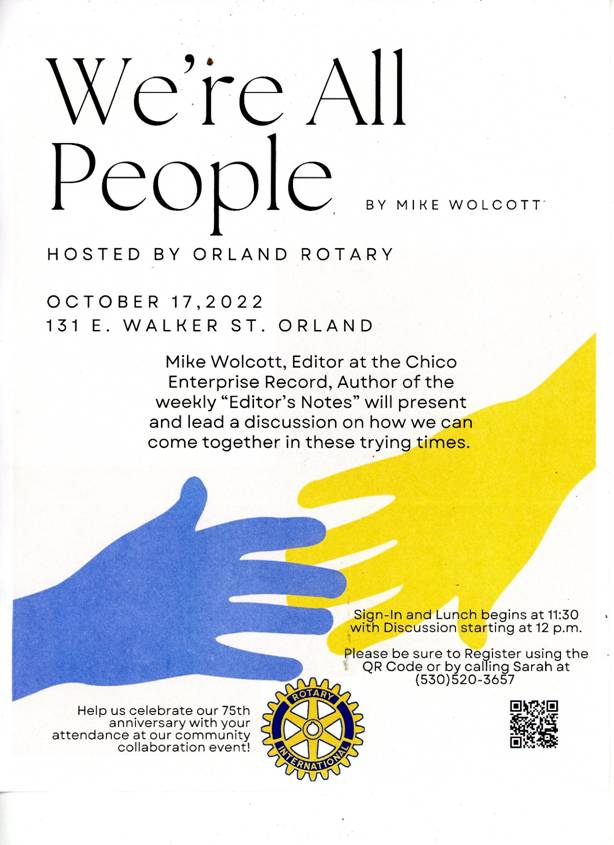 Register by June 1, 2022 to secure your space to the “WORLD PREMIERE EVENT – THE POWER OF ROTARY” - October 28-30, 2022  - for only $199.  After that?  The price changes to $225 per person.  Then soon it's $250 per person…
There’s more!  You can NOW register for
Golf on Thursday, October 27th at the Del Monte Golf Course for only $140 (includes lunch).  A Hollywoodesque-soiree on Friday evening, October 28th for $25 at the stunning Marriott Ferrante Bay View venue (dancing, dessert, open bar and stars galore; space limited).