The Crab Feed is January 21st.  There will be a Zoom planning meeting on Monday, November 14th, at 5:30 pm. The Zoom info is:

Maybe clicking on the link in Eric’s email received on Wednesday will work smother.

Members are encouraged to begin securing donations for the Silent Auction NOW.

The December 6th meeting will be our annual Holiday Party.  Ravi will conduct the gift exchange.  If you want to participate, bring one gift per couple valued at $20-$25.  The cost of the evening currently estimated to be $35 per person.

Larry Bradley introduced our Student of the Month, Isaura Nees and her father.  Apparently, member Kelly Lotti is her aunt, if I heard correctly.

Mike Wacker introduced Greg Holman, our program for the night.

The next meeting will be on MONDAY November 28th.  It will be a Monday Night Football meeting at Woodstocks Pizza in downtown Chico.

Glenn Pulliam was recognized for his trip to Italy. He contributed $50.

Jim Patterson was recognized for his 91st birthday.  He contributed $10 for his birthday and $5 to embarrass Larry Bradley.  At his request, “Happy Birthday” was sung.

Lastly, since President Eric failed to recognize me for my trip to Nueva Vallarta last month, I voluntarily contributed $25.

Larry Bradley presented a Student of the Month plaque to Isaura Nees and extoled how well she does in school.

Mike Wacker introduced Greg Holman, Captain of the Durham Voluinteer Fire Department.  He talked about the fire department and donations to the fire department.  He then took us outside to his fire department truck and showed us the various pieces of equipment, all donated to the fire department, for extracting injured persons from wrecked cars, including their Jaws of Life, a piece of equipment for sawing into cars,  a bright battery operated light  and other equipment.  See photos below. He talked about several incidents in which this equipment has been used, not always sucerssfully.  But many have survivied because they were able to get them out of their cars and to the paramedics much more rapidly than before they had the equipment. 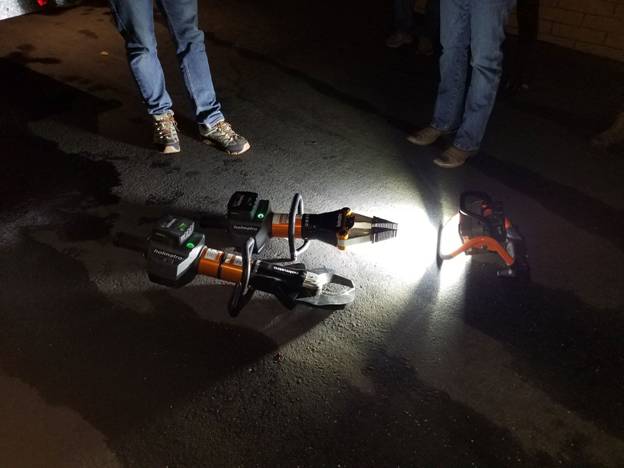 Eric then closed the meeting.

What a District Conference we had in Monterey, aye?!

Rotary Projects Around the Globe

Like other places in the Dominican Republic, Los Cocos de Jacagua faces shortages of suitable housing and sanitation infrastructure. For 15 years, the Rotary Club of Santiago Monumental has addressed community needs there in tandem with a Rotary Community Corps, creating a library, a community center, playgrounds, and a financial cooperative. They installed hundreds of latrines and provided medical care, among other contributions, many accomplished with the help of international partners in District 7710 (North Carolina). The Santiago Monumental club has begun building homes for families, completing nine as of February at a cost of about $10,000 each, says club member David Crow. “Our international partners spend a week at a time with us, providing labor for the construction effort,” Crow says. “This alliance is a powerful way to promote peace and offer Rotarians the opportunity to live and work together with local Rotarians and the communities served.” 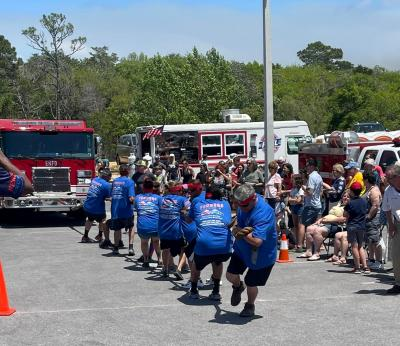 Four Rotary clubs in Florida flexed their muscles with a fire truck pull to raise more than $15,000 to refurbish the entrance of an assisted living facility. Sixteen teams competed to be the fastest to tug the 17-ton truck 50 feet across the parking lot of a sponsoring brewpub. Led by the Rotary Club of Mid-Bay Bridge (Choctawhatchee Bay), the April event drew about 400 people. Joining the effort were the Rotary clubs of Destin, Fort Walton Beach, and Niceville-Valparaiso, which sponsored the winning team of Niceville High School football players. Members of two Knights of Columbus chapters and the Boggy Sisters, a senior support group, assisted the Rotarians. Community partnerships “lightened the load and made the event possible,” says Steve Wolfrom, immediate past president of the Mid-Bay Bridge club. 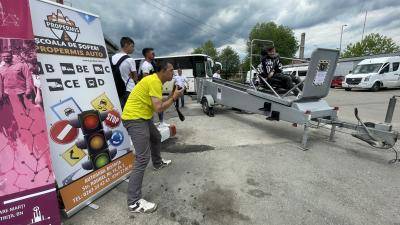 To put the brakes on dangerous driving, the Rotaract Club of Bistrița Omnia recently partnered with the police and a driving school to set up a car crash simulator at locations in the northern Transylvanian city. “It consists of a driver’s seat equipped with a seat belt, fitted on a moving platform that reaches a speed of about 18 mph,” says Christian Nistor, immediate past president of the club. “The platform crashes into a stopping bar, simulating the accident.” The device was built by the Rotaract Club of Târgu Mureș Téka. Interact and Rotary clubs have also helped with the project. During one simulation event in May, about 200 people were put to the test during the Drive Safely, Choose Life initiative, Nistor says. “Drivers are reminded of the importance of seat belts and the effect of speed in a car crash,” he says. 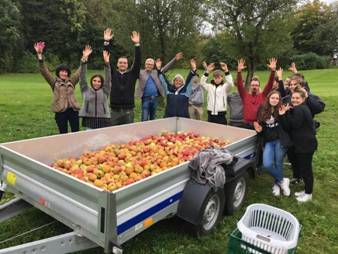 The Rotary Club of Göttingen-Sternwarte teamed up with the Production School Göttingen, a trades-oriented institution for teens, to harvest about 2 tons of apples and turn them into nearly 400 gallons of juice. The Apfelfest project culminated in October 2021 with the juice being donated to elementary schools or sold, raising more than $3,300 for End Polio Now. “The juice is amazing — a sweet-sour note, pure apple flavors,” reports club member Sönke Jaek. “And the dry apple mash was used to feed game such as deer and boar. They loved it.” Club members also serve as tutors and assist the students in writing resumes, finding internships, and applying for jobs. 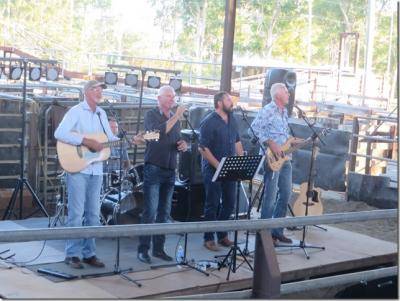 Reveling in a uniquely Australian art form, the Rotary Club of Gloucester stages readings of bush poetry, which celebrates life in the less populated hinterlands. “Bush poetry is principally stories from the bush,” the tales suitable for “shearing sheds, cattle yards, pubs, etc.,” says club member Grahame Stelzer. “Normally very funny, sometimes rude, and occasionally serious.” In February, three poets and a country band headlined the Bush Poetry at the Saleyard event, held, fittingly, in a livestock arena. “The idea was born at a private dinner when one of the guests just happened to be a current Australian bush poet champion,” says Stelzer. “My club was looking for a fundraiser for a nursing home, so it all came together that night.” The festivities raised about $3,900 for local projects.

This story originally appeared in the November 2022 issue of Rotary magazine.